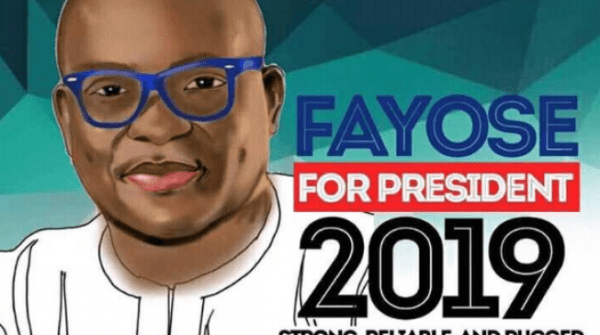 Why I buried my presidential ambition – Fayose

The Governor of Ekiti state, Ayo Fayose says he will no longer contest the 2019 presidential election because the All Progressives Congress (APC) rigged the last governorship election in the state.

Fayose had shocked many when he  declared interest in the presidency, vowing to defeat President Muhammadu Buhari in a free and fair election.

“I am inviting you today, distinguished leaders of our party, is to inform you formally that I will be seeking the ticket of our great party, the Peoples Democratic Party (PDP), to contest the 2019 presidential election,” he had said on September 28, 2017.

“My party leaders, standing before you is Peter (The Rock) Ayodele Fayose, the man already destined by God to take Nigeria out of the present political and economic stagnation.”

But while speaking with the cable, Fayose said he has decided to put his ambition aside and face the petition filed by Kolapo Olusola, his deputy and gubernatorial candidate of the PDP in the last governorship election.

The governor spoke through Idowu Adelusi, his chief press secretary.

“Governor Ayodele Fayose has decided to bury his ambition because of the last Ekiti governorship election that was rigged by the APC and we have already filed a petition at the tribunal,” he said.

“So presently, the governor is more concerned on getting back the mandate in the tribunal for his deputy, Professor Eleka than his presidential bid.

“That’s the preoccupation for now, so for that reason, he has decided to put his ambition aside, and face the petition in the tribunal and make sure the PDP gets its mandate back.”

The governor also said he has no preferred presidential aspirant among those jostling for the PDP ticket.

“Though, the governor as a human being, a leader and party member is entitled to have his own choice but for now, he has remained neutral,” he said.